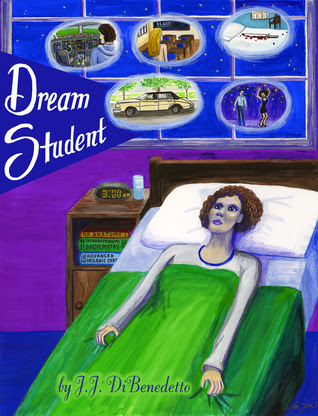 Synopsis: What would you do if you could see other people’s dreams? If you could watch their hidden fantasies and uncover their deepest, darkest secrets…without them ever knowing?

Sara Barnes is about to find out. She thought that all she had to worry about was final exams, Christmas shopping and deciding whether she likes the cute freshman in the next dorm who’s got a crush on her.

But when she starts seeing dreams that aren’t hers, she learns more than she ever wanted to know about her friends, her classmates…and a strange, terrifying man whose dreams could get Sara killed.

“Dream Student” is the thrilling first installment of the Dreams series.

What I liked:
Very realistically written, made me feel like it was me who was at university. Relatable characters, beautiful acts of friendship and love. I have never read a detective story or a story where the main protagonists have to solve a mystery because I don't like that genre, but I was pleasantly surprised. University drama filled with love and mysteries.
The culprit was easy to spot, at least for me, so I expected to make the book less appealing to me. Quite the opposite, I wanted to know how it ends and what happens.
Didn't feel like out of the world, no I-can-take-down-everyone Steven Seagal approach. Showed me how you can solve sticky situations without being a spy and actually saving lives.

What I didn't like:
About halfway through the book I has a very strong suspicion about who is the person behind the crimes, so that took away a bit of that tension and anxiety.

All in all, a nice book with a pieces of nearly everything. Wasn't too slow for me to fall asleep, wasn't too quick for me to die from stress of what is going to happen.

Suddenly, Sara isn’t in the lecture hall anymore. She’s sitting somewhere else, on metal
bleachers inside a large gym. The bleachers are mostly filled, and every eye is directed towards
a tall, dark-haired young man standing at the free-throw line, preparing to take the gamewinning
shot.

It takes her a moment to gather her bearings. Sara has no idea why she’s in a gym
watching a basketball game: she has no friends on the team, and she doesn’t even like the sport.
She has the oddest feeling that she doesn’t belong here at all, that she’s not supposed to be here.
And then she sees herself down there on the court with the rest of the cheerleaders.

As soon as she sees that, she knows: this is not her dream anymore. It has nothing to do
with her. The Sara in the cheerleader outfit is a character in someone else’s dream. She doesn’t
know how she knows this, but she has no doubt whatsoever that it’s true. It’s crazy and it’s
impossible and it’s happening just the same.

Sara doesn’t know what to do; this is so far out of her experience that she doesn’t even
know where to begin. All she does know is that she’s in someone else’s mind – or somebody else
is in hers. When the young man with the basketball looks up from the court and sees her, locks
eyes with her, it’s all too much.

This isn’t supposed to be happening, Sara thinks, but she doesn’t know how to get out of
his dream, any more than she knows how she got into it in the first place. And then panic sets in
– what if she’s trapped here, what if she can’t ever get out of his mind, or throw him out of hers,
whichever it is – and she begins screaming…

Email ThisBlogThis!Share to TwitterShare to FacebookShare to Pinterest
Labels: Books

Read the Flower: The Beautiful Beginning
by Alexandra Lanc

Harry Potter and the Sorcerer's Stone
by J.K. Rowling

Confessions of a Shopaholic
by Sophie Kinsella

Gump and Co.
by Winston Groom